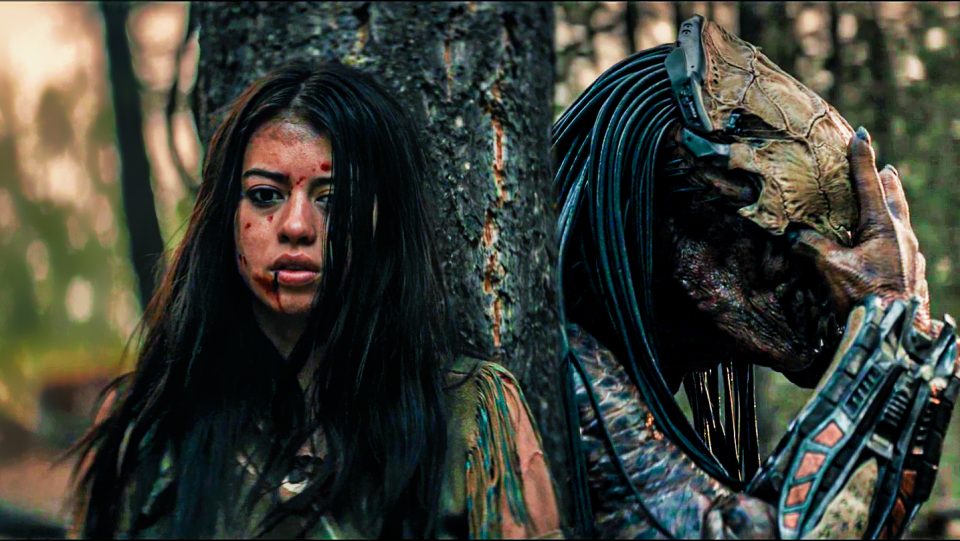 Prey, setup 300 years before Predator, is an original story that caries the essence of the first Predator we all know and remember with Arnold.

The Alpha hunter alien is back and it’s more visceral and brutal than ever, he is mercyless and relentless hunting down his “preys” and “threats” of planet Earth.

The predator is thinner, the head is more proportional to his body and caries much less armor but with all his signature gear and weapons with the elegant though that they are not as much as advanced as in the Predators movies we all known.

A true Heroine with key side characters

Amber MidThunder is the main character who wants to prove his spirit and determination as a true hunter warrior of her tribe, the chemistry with her elder brother is great and it’s even better with her dog.

She is strong, resilient and smart just as her elder brother who is the master chef warrior of the tribe.
At the same time, she is not “overpowered” or “extra lucky” which for me is a GREAT positive point for the movie ambient and credibility inside the movie plot of fighting an Alien.

Once again, no lore.

For me this is a negative point since I was expecting information, lore about the Predators alien race as fundamentals for the franchise setting up a solid direction for expansion with more movies. But we have nothing of that here, true to the first movie, there’s absolutely no “new” information about the Predators, the only highlight information is that indeed, they are warriors who test themselves hunting “threats” taking trophies along the way but that’s it. It’s true that set in 1720s Earth time, there are barely no “technology” to investigate or properly understand such an advanced race of tech as Predators.

The photography, scenery of this movie is spot on, the VFXs used in other animals than the Predator itself can be a little “weak” and a bit distracting for the eye, but the Predator itself does feel very real at all time and that’s the most important so hat off from me. The action scenes, choreography are great, realistic despite the fact that they are fighting an Alien.

The 1h 30min duration is correct, the opening, introduction and characters bonds are well executed with great visual communication, but, subtitles are a must in this movie due Native american and French languages dialogues during the film.

I did really enjoy it and feel happy to finally see a decent Predator installment I hope they keep expanding the franchise in this direction in the future.

Who is Black Freeza in Dragon Ball Super Manga